Affiliated to the Kent County Photographic Alliance
You are here: Home / Meeting Reports

This was our third film lecture via Zoom. Two lectures were chosen, both from the same speaker, photographer Judy Hancock Holland. Judy lives on the east coast of Vancouver Island so we would never have been able to invite her to speak in person!

The first lecture was part I of a talk entitled “Building Block of Composition”, in which Judy discusses the use of Lines, Shapes & Forms, Subject Placement, Patterns & Repetition, Contrast, and finally Texture in the composing of a successful image. It was full of wonderful photographs and great tips. We hope to show part II of the talk in the new year.

After a ten minute break we saw the second talk – “Minimalism in Photography” – in which Judy
demonstrates how to create striking minimalist images that communicate both the essence of a subject and the feelings that the photographer had when taking the shot.

It was a very interesting and well-attended evening.

Despite the virus and the looming lockdown, the club was pleased to take part in a friendly inter-club battle with Faversham Camera Club. The competition was changed to DPIs only and Faversham club hosted the evening via Zoom. Judge for the evening was Carol McNiven Young FRPS EFIAP BPE4* CPAGB, from her home in Nottingham.

There was a very varied selection of images for Carol to critique, and she was very generous with her praise. Herne Bay scored one 20 – “Central Tower, York Minster” by Denise Smith, matching Faversham’s one 20. The Club also managed four 18s: “Beefly Sunbathing” by Duarte Figueira; “Dying in Isolation” by Steve Roberts; and “Sunrise from the Platform” and “The Palace Pier” both by Colin Winch. 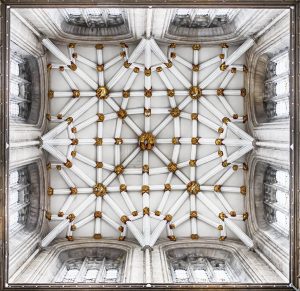 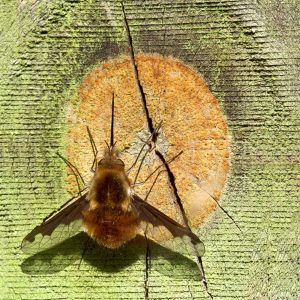 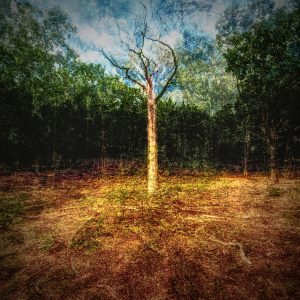 “Dying in Isolation” by Steve Roberts 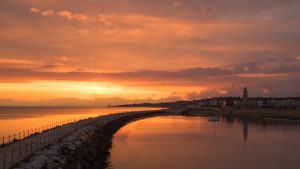 “Sunrise from the Platform” by Colin Winch 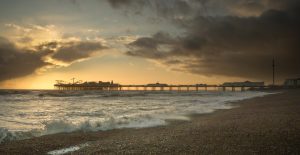 “The Palace Pier” by Colin Winch

Sadly, Herne Bay couldn’t quite match Faversham in the scoring, losing 334 points to their 343. The club did, however, take the final accolade, winning the judge’s favourite image, which was “Central Tower, York Minster” by Denise Smith.

A fine win for Faversham, and we look forward to meeting them again next season.

The weather for this meet up was grey and rather windy (so much so that the harbour arm was closed off), but with the second lockdown due to start in four days’ time a number of members braved the conditions to get together and were rewarded with plenty of photo opportunities – from massed surfers to public art to graffiti. And it didn’t rain!

Our second film lecture by Zoom was given by Irene Froy with a presentation titled: “Pictures on Permajet”. Irene showed a wide range of images taken on her many trips around Europe with husband Jerry.

There were landscapes and flowers, as well as buildings inside and out. There were some touches of frost, some mist and some more colourful shots too. Irene’s gentle manner and her references to how Jerry’s help was frequently enlisted made her talk very listenable and entertaining.

Our regular fortnightly club outing this weekend was to Deal. Given the time of year the weather was kind to us – not much sunshine but a bright day, and there was plenty to photograph from the pier to the beach huts to the plentiful small boats. It was a very well attended meet-up and we even managed a socially distanced half-hour tea break sitting outside without freezing!

In a new step for the club, we tried our first film lecture via Zoom. The first was an RPS interview with Joe Cornish, who explained his approach to landscape photography. It was an interesting film; Joe has a great affinity with trees, and some of his images were very interesting. We also had the opportunity to see some of his excellent landscapes.

After a quick chat about what we’d seen, and a short break to get a cuppa, we watched “How to make a composite” by Ross McKelvey. McKelvey is one of the top Irish photographers and in his video, he took members through the full process of creating a composite image with lots of tips on the way that will be useful whether you are doing creative composites or just processing a straight image.

This afternoon’s meet was at Rochester and in the run up to the weekend it was clear that the weather wasn’t promising. We met up at the cathedral and then went on to the castle before finishing off along the high street. The sun threatened to break through a couple of times before giving way to increasingly persistent drizzle. Despite that, those who attended had a very enjoyable time.

Having successfully run our Summer Trophy using Zoom, we tried our hand at a critique evening. The subject was “Celebration” and there was also an “Open” section. Our judge for the evening was Cherry Larcombe EFIAP ARPS DPAGB BPE5*.

We ran the “Celebration” section first, with a assortment of celebratory images for Cherry to appraise. She gave first place to “Head of the Parade” by Aliy Fowler. In second place was “Birthday Cake” by Peter Riley and “The Winner” by Eileen Wilkinson ARPS, CPAGB, AFIAP was third. 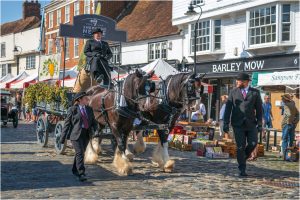 “Head of the Parade” by Aliy Fowler 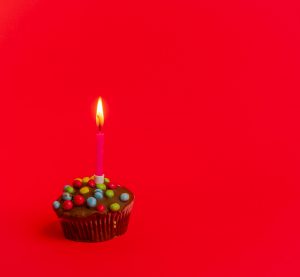 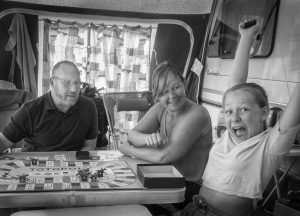 “The Winner” by Eileen Wilkinson

We launched straight on into our “Open” section. Once again, there was a great variety of images for Cherry to talk us through. First place went to “Reculver View” by Eileen Wilkinson ARPS, CPAGB, AFIAP. In second place was “Tracks through the Harvest” by Steve Roberts LRPS and Gareth White was third with “Sneaking Past the Hydra”. 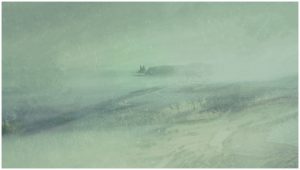 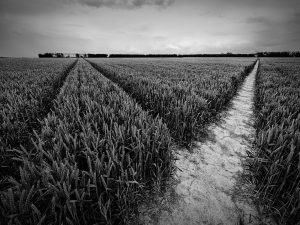 “Tracks through the Harvest” by Steve Roberts 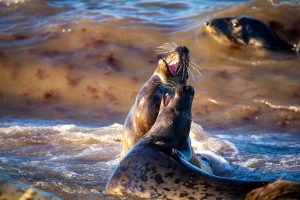 “Sneaking past the Hydra” by Gareth White

For our second weekend meet of the new club season we went to Conyer Quay, a location that many of us were previously unaware of. It proved to be well worth the visit and the estuary landscape gave a wide variety of subjects to catch our attention, all of which were enhanced by the glorious afternoon sunlight. The meet was well attended with several club members being present, all of whom had an enjoyable time.

This seems to be a month of firsts: this time, our first Zoom meeting. Unfortunately, due to the new Covid-19 rules, our meeting place, the Beacon Centre, is once more closed. Undeterred, we decided to embrace the virtual.

The Summer Trophy itself had to change to accommodate the virus – we could not have a print section this year so opted for two DPI subjects instead: “Through the Window” and “Abstract”. Our judge for the evening was Kirsty Ralfs ARPS QGP, who was fully conversant with Zoom.

Starting with “Through the Window”, Kirsty was presented with many different interpretations of this. First place was “Contemplating” by Volker Jottkandt, second was “Welcome to the bar” by Aliy Fowler, and “Life goes on out there” by Steve Roberts LRPS was third. 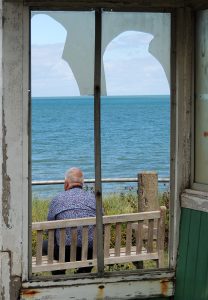 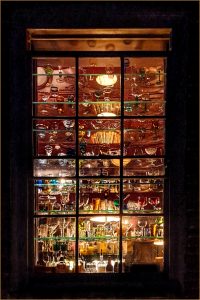 “Welcome to the Bar” by Aliy Fowler 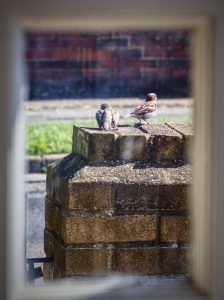 “Life goes on out there” by Steve Roberts

Images held back should be considered as highly commended. In this section, these were: “Are you sure lockdown applies to me” by Kevan Ford and “Welcoming lights” by Peter Riley

We didn’t stop for a break, so went straight on with the “Abstract” section. Kirsty was pleased to find that some of the images had an explanation via the title, whilst others left her guessing. She gave first place to “Apparitions in the limescale” by Steve Roberts LRPS, second was “Fireball” by Eileen Wilkinson ARPS, CPAGB, AFIAP, and “Silent pool” by Aliy Fowler was third. 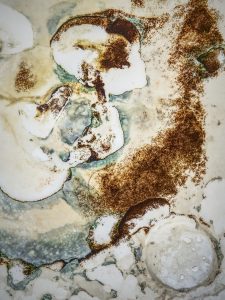 “Apparitions in the limescale” by Steve Roberts 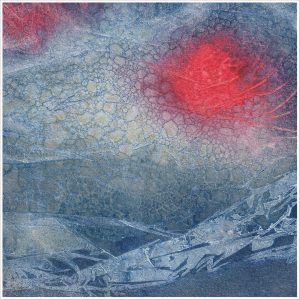 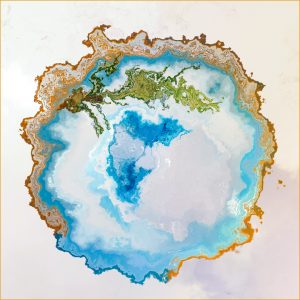 Running the Zoom meeting was a steep learning curve, but was a very enjoyable evening.

Our club had its first weekend meeting under our Covid-19-restricted programme, during which our meetings will take place alternately between the Beacon Centre and at an outside location. This Sunday we decided to travel to Dungeness, just over an hour’s drive from Herne Bay.

The meeting point chosen was the Pilot Pub, however some of us ended up at another pub, and it was difficult to make contact with each party to join up. (We need to get a little smarter with communications contact numbers, etc.). Unfortunately one member couldn’t find any parking spaces and had to return home.

Those that remained had a very enjoyable afternoon. Dungeness beach is littered with old boats, sheds, fishing paraphernalia, and rusty old abandoned machinery. The sky was, at times, very dramatic, and often threatened rain, but thankfully it kept dry. The place was a lot busier than anticipated, but where we focussed our attention, on the beach, it was easy to keep a proper social distance.

The two groups eventually met up and the two locations’ photographic merits were discussed. We left for home at around 5pm with cards full of images and thoughts that despite some initial hiccups, from which we shall learn, we all had a great afternoon.

We had a good turn out of members for our first socially distanced meeting of the new season, with an additional member joining us by Zoom.

Our Chair, Peter Riley, began the evening by leading a shortened AGM, which passed last season’s accounts, agreed a temporary new membership fee, and elected the new committee. With the formal business out of the way, the rest of the evening was spent looking at images members had taken over the summer.

It was a strange experience, following strict Covid-19 rules, but it was a success. Hopefully, now we know exactly how things will work, more members will feel they can join us in the hall and by Zoom.